TELEGRID has developed and is producing several Secure Network Operations products for the US military.  This equipment centers around management and control of legacy and modern C4ISR equipment and systems that support secure voice and data transmission in a disruptive, intermittent connectivity, and low-bandwidth (DIL) environment.  TELEGRID experience-base includes voice and data encryption devices such as VINSON/ ANDVT encryptors including KY-57, KY-58, KY-99, and KY-100; user terminals such as DSVT and DNVT; transmission equipment and systems including Line-of-sight (LOS) radios, Beyond-Line-of-Sight satellite and troposcatter systems and copper and fiber optics cables. 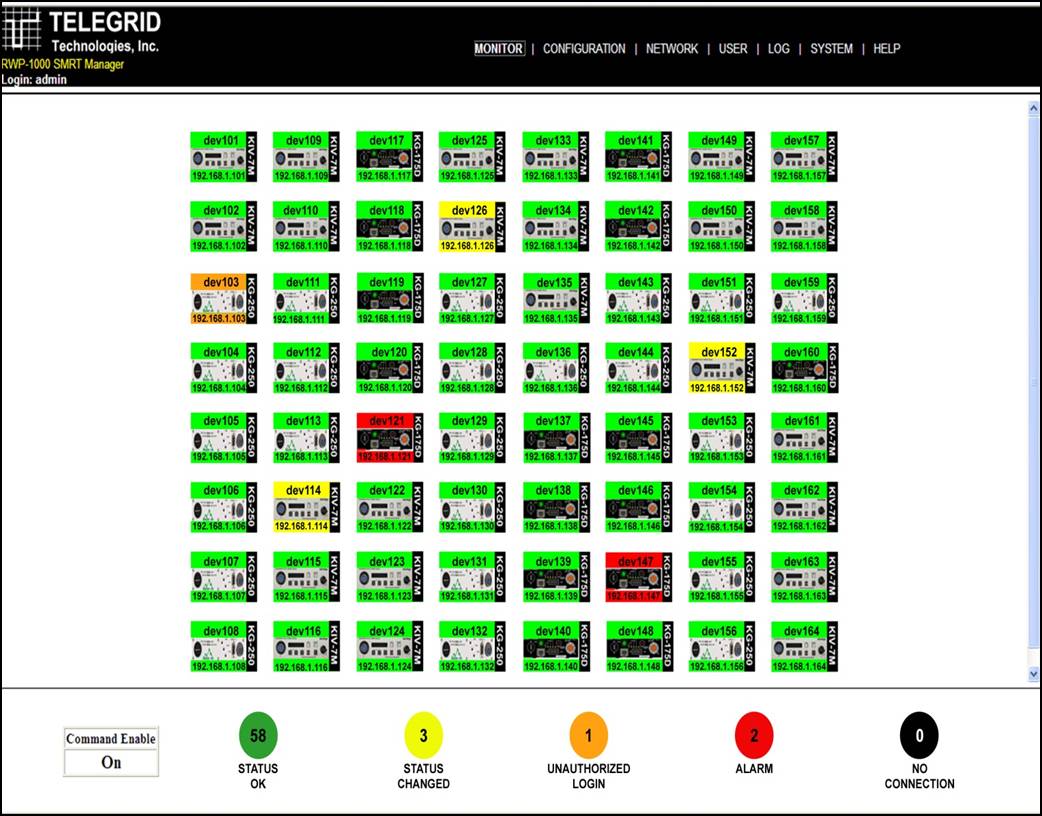 The Secure Multi-web Remoting Tool (SMRT) RWP-2000 automatically monitors the web-based configuration tools of a large number of network displays status changes and alarms on a single screen. The SMRT display provides at-a-glance status indication of each individual device and allows operators to “drill down” to the web configuration screen of each individual device. Among the many benefits of the SMRT is its simplicity and ability to reduce the man-power needed to manage a large number of devices thus providing a highly reliable network at significantly lower operating costs.  Data Sheet

The Secure Multi-web Remoting Tool (SMRT) RWP-1000 is specifically designed to monitor the web-based configuration tools of network encryptors including the KIV-7M, KG-250, and KG-175D.  It displays status changes and alarms on a single screen and provides at-a-glance status indication of each individual device.   Users can “drill down” to the web configuration screen of each individual device. Among the many benefits of the SMRT is its ability to reduce the man-power needed to manage a large number of encryption devices.  The RWP-1000 is currently deployed worldwide by the Defense Information Systems Agency (DISA). Data Sheet

Read more about Expanding DoD Network Management with the SMRT

TELEGRID’s SMRTe platform evens out the network authentication playing field by allowing all network resources, regardless of whether they use single factor authentication or any one of the popular MFA methods (CAC) to utilize a single MFA technology.  It is done simply without changes to resources, adding firewalls, changing network architecture or introducing latency.  The straight-forward central authentication nature of the SMRTe allows for easy implementation of future MFA solutions.

Adding a SMRTe to a network – available as a hardware appliance, a software application or a Virtual Machine – ensures that all resources are protected by a single MFA technology. Data Sheet

modern networks.  PKI certificates combine an individual’s identity information with cryptographic information that is non-forgeable and non-changeable.  They provide a standards-based representation of the individual’s physical identity in electronic form and enable data sharing among appropriate, broad and dynamic communities of interest.  TELEGRID’s SMRTe PKI Proxy (P/N: RWP-1801) was designed to seamlessly allow the use of PKI certificates in an existing infrastructure. Data Sheet

TELEGRID’s standalone Layer 2 Traffic Flow Security (TFS) device masks the transmission of information in order to prevent interception and/ or analysis of traffic patterns and characteristics. The TFS Device produces a constant data stream at a programmable data rate regardless of the data rate of the input Local Area Network (LAN) connection. It can be used in conjunction with an encryptor or by itself to mask data transmission flow. The device’s settings are user configurable (data rate, encapsulation method, etc.) and the unit requires little to no setup.  The TFS was designed for the Defense Information Systems Agency (DISA) and is currently deployed by DISA.  Data Sheet

The SRA-851 extends the connection between a KY-100 ANDVT AIRTERM (or KY-99A MINTERM) and a radio transceiver (e.g., RT-1851, AN/PRC-117, etc.) over a communications link composed of a satellite hop, a copper cable or a fiber optic cable.  Data Sheet