The AeroGRID+ hardware platform is drone-agnostic and can be mounted on most commercial drones. It includes an optional number of multi-input-multi-output (MIMO) mesh radios capable of forming a Mobile Ad hoc Network (MANET). This mesh network provides intra-drone and drone to ground-station connectivity. It transfers streaming video between drones and telemetry data to the drones’ Autopilots which control all motion and sensor activities. The hardware platform also contains the AeroGRID+ software app which controls drone functionality within the swarm. Functions such as reconnaissance, target recognition, etc., use different apps which are uploaded to the AeroGRID+ platform by the operator TELEGRID has developed a number of apps and is currently developing a library of apps with or without the help of third party developers.

The mesh network also provides drone access to various local networks and to the cloud. Benefits of this capability include optimizing the network’s quality of service, extending the drone’s flight time, and reducing the risk of drones’ loss. Also, having several inter-communicating drones positioned in different locations around a target and sharing their views of the target’s behavior from different perspectives produces a comprehensive view of the environment, avoiding mid-air collisions and allowing drones to benefit from other drones’ experience. 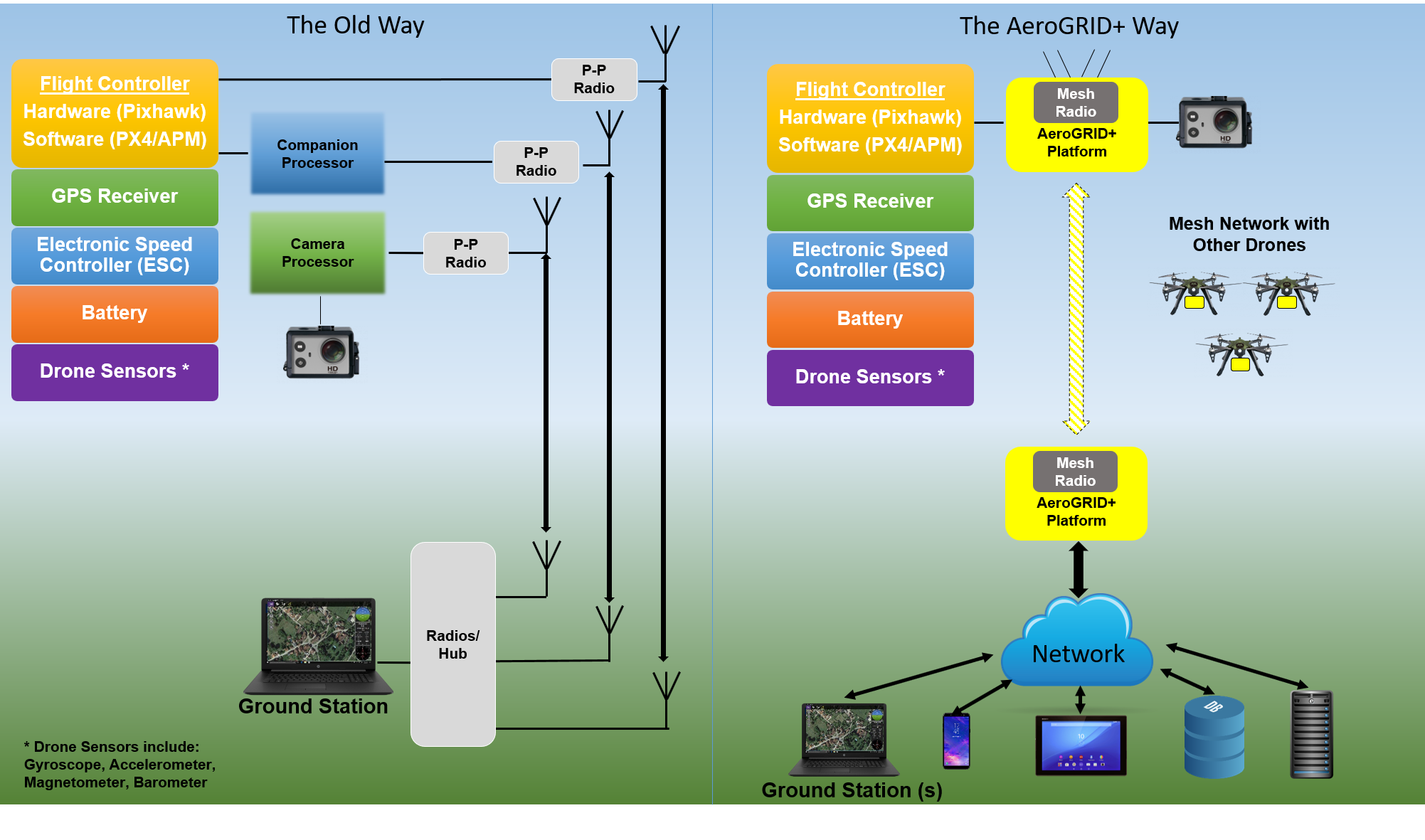 Alternatively, AeroGRID+ drones use one or more mesh radios to perform all data and control information communications among drones and between drones and ground stations as shown in Figure 2. The mesh radio is a multi-channel Multi-Input-Multi-Output (MIMO) radio developed by TELEGRID to support all data and control transmissions on the drone. It interfaces with the Autopilot through a serial interface using the MAVLink protocol thus controlling the basic operation of the drone. This not only replaces three drone radios with one, but also allows drones to exchange situational awareness information and operate completely autonomously.

The AeroGRID+ transmits telemetry data over the Autopilot serial port in order to perform independent decision-making such as modifying the mesh configuration based on drone position. This follows a modern hybrid publish-subscribe and point-to-point design pattern: Data streams are sent/ published as topics while configuration sub-protocols such as the mission protocol or parameter protocol are point-to-point with retransmission.

The AeroGRID+ software retrieves location data in the form of GPS coordinates from the drone’s GPS receiver in order to ascertain the drone’s location.

Applications Development
The AeroGRID+ drone swarm technology is based on software apps, embedded in the companion processor, which control drone functionality within the swarm. Operators can upload different apps in order to change functionality of specific drones, or the entire swarm. the development of custom applications to aid in network configuration as well as apps that are beneficial to the overall drone operations. TELEGRID has developed a number of apps and is currently developing a library of apps independently or with the help of third party developers.

Security
Communications security is a critical element of the AeroGRID+ drone swarm technology. The main focus in this area is ensuring that data being transmitted is encrypted and not retrievable by elements outside the network. Current point-to-point radios do not have a built-in encryption engine and often transmit data and video “in the clear”. The danger in this approach is that not only can data be viewed by third parties but also control messages can be transmitted to the drone to change the flight path or even crash the drone.
Since the AeroGRID+ network is IP-based, it includes the latest network security strategies including end-to-end encryption and user authentication. It uses secure TCP/IP to ensure data transmission cannot be intercepted by a third party.

The AeroGRID+ drone includes a custom authentication engine which ensures mutual identification of transmission parties it denies access from any untrusted sources. User authentication, a critical component of the AeroGRID+ network, can only be provided due to the symbiotic nature of the relationship between the drone and the AeroGRID+ platform.

To learn how AeroGRID+ can work for you contact Beth Flippo at beth.flippo@telegrid.com or 973.994.4440.